Obama's czars; How many is too many to have?

Let's count Obama's czars; Health reform Czar ,  Urban affairs Czar, Energy and climate change Czar, Car Czar, AIDS Czar, Drug Czar, and he just recently picked his gaffe galore VP as the Stimulus Czar.
So what's the big deal?
Czars are not accountable to Congress or to Cabinet officials and rarely testify before congressional committees. These Czar will not go through confirmation hearings, and they  are not accountable to public.  So why is he doing it, well a Democrat Senator Byrd  thinks that Obama's administration is tying to accumulative more power through these czars and asserting more control.  This is a direct conflict with Obama's commitment to openness and transparency.
There is no hope and no change!! Another broken promise.
Posted by mom & pop bloggers at 10:34 PM 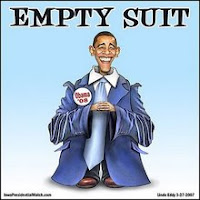 "And I believe the nation that invented the automobile cannot walk away from it."

~ President Obama during his first Sate Of The Union address.

How embarrassing! Our president does not know that we did not invent automobile and now Germans are probably  laughing at us!
Posted by mom & pop bloggers at 4:04 PM

Why Obama Is So Secretive?

"Right now in Congress, they’re working on the budget. And just like the last time the House prepared to spend ungodly amounts of money, the Democrats have excluded the Republicans. Even worse, they’re not letting the public see the bill before it’s voted on.

Meanwhile, the Obama administration is working on its defense bill. And to make certain that everyone sings from the same hymnal, they’ve ordered top defense officials to sign a secrecy oath that they will not discuss the details with anyone outside the federal government."

More "hope & change" stuff from Obama's administration.  Do they know that their mantra of "change & hope" is becoming  ridicules? Here is the headline:

"Barack Obama has been embroiled in a cronyism row after reports that he intends to make Louis Susman, one of his biggest fundraisers, the new US ambassador in London. " Read on.

Or you can read some reaction about this appointment here.
Posted by mom & pop bloggers at 1:55 PM

Will Obama stop campaigning and start governing? Can he do that? Well even NYTimes most Liberal commentator has her doubts. Maureen Dowd had this to say:

"Though he demonstrated in the campaign that he has a rare gift for inspiring the country with new belief in itself, Mr. Obama has not yet captured either the grit the moment requires or the fury it provokes. He has not explained in a compelling way why Americans who followed the rules need to sacrifice more to help those who flouted the rules."

and this from Jennifer Rubin:

"Much as it may pain the former community organizer, Obama’s job is not now to criticize, demean, rile and anger the public. We thought he, better than most politicians in recent memory, understood the power of rhetoric to lift and inspire, but maybe that only worked as a campaign tactic. Now there is no George Bush to kick around. And the result seems to be a surly and depressive presidency. Perhaps we were not the change we were waiting for after all".

Obama's Rhetoric Is the Real 'Catastrophe'

Mr. Obama's analogies to the Great Depression are not only historically inaccurate, they're also dangerous. Repeated warnings from the White House about a coming economic apocalypse aren't likely to raise consumer and investor expectations for the future. In fact, they have contributed to the continuing decline in consumer confidence that is restraining a spending pickup. Beyond that, fearmongering can trigger a political stampede to embrace a "recovery" package that delivers a lot less than it promises. A more cool-headed assessment of the economy's woes might produce better policies.
Read the whole article here.

Enough Mr. President enough! It's time to lead the country and stop campaigning!
Posted by mom & pop bloggers at 2:32 PM

Another broken promise by Obama!

Thank God for youtube! Here Obama promises that the public will have 5 DAYS to look online and find out what's in his proposed bills before he signs it. Well, another promise broken. Barack Obama is going to sign the largest spending bill in US history on Monday, It had only been posted online for 12 hours before it was voted on in the US House and Senate.
Posted by mom & pop bloggers at 7:16 PM

Obama is changing his webiste to remove any past promises!

The American Small Business League is also finding out that Obama is breaking with his campaign rhetoric. Here is what they had to say:

Since making that statement almost a year ago, President Obama has consistently refused to make good on his campaign promise, and support legislation to stop Fortune 500 firms from hijacking federal contracts designated for America's nearly 27 million small businesses.

Not only has President Obama refused to propose even a single policy to address the problem, but he actually changed his Web site to remove the appearance that he had ever made the statement, "It is time to end the diversion of federal small business contracts to corporate giants."

Is someone counting the broken promises? It's interesting to see how many it will add up until his re-election? 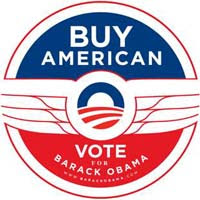 Remember this promise from Obama during campaing, well it's gone now. Another promise broken!
Posted by mom & pop bloggers at 5:17 PM

Things must be really bad for Obama when you see Daily Show mocks him for his performance this week, watch:

“For officials who came into office promising to operate the most honest and transparent White House and Congress ever, President Barack Obama, House Speaker Nancy Pelosi and Senate Majority Leader Harry Reid seem determined to achieve exactly the opposite result. . . . Less than 48 hours elapsed between the time the text of the compromise became available for public examination late Saturday evening and yesterday’s 61-37 vote for passage. At that rate, the Senate effectively was spending about $300 million every minute while considering the compromise, and allowing taxpayers a scandalously brief opportunity to discover how the senators were doing it. ....” Continue to read here.
Another promise broken piece by piece.
UPDATE: Republicans Shut Out of Stimulus Conference Negotiations. More signs of bipartisanship, Obama style!
Posted by mom & pop bloggers at 10:14 AM 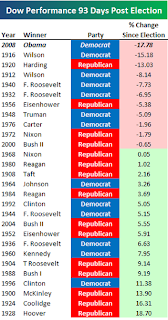 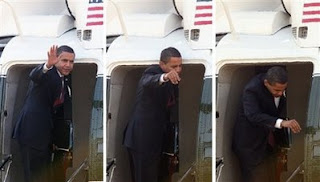 Obama waves and learns the door on Marine One is much shorter than he is, and bumps his head ...ouch! he is getting used to Marine One. Go here and vote for the picture.
Posted by mom & pop bloggers at 8:35 AM

He dictates, complains and campaigns — ultimately not very effective means for a president. And the high rhetoric mixed with nasty partisanship is not only confusing, but it undercuts what for him was the key attraction for many voters — you remember: his temperament.
Read the rest here.
Posted by mom & pop bloggers at 12:24 AM

Wow! another tax cheater in the Obama's administarion:

A Senate committee today abruptly canceled a session to consider President Obama's nomination of Rep. Hilda Solis to be labor secretary in the wake of a report saying that her husband yesterday paid about $6,400 to settle tax liens against his business -- including liens that had been outstanding for as long as 16 years.

Oh! I see this one does not matter, it's the husband who cheated for the last 16 years while she was the congresswoman! Indeed the era of responsibility has begun.
Posted by mom & pop bloggers at 7:57 AM

Obama's empty words, and his politics of fear!

What happened to politics of HOPE that he run during his campaign? His words mean nothing anymore.  Here is what he said yesterday:
"A failure to act, and act now, will turn crisis into a catastrophe."
-- President Obama, Feb. 4.

Catastrophe, mind you. So much for the president who in his inaugural address two weeks earlier declared "we have chosen hope over fear." Until, that is, you need fear to pass a bill.
Posted by mom & pop bloggers at 8:56 PM

I was not raised in a particularly religious household.  I

had a father who was born a Muslim but became an atheist,

grandparents who were non-practicing Methodists and

Baptists, and a mother who was skeptical of organized

religion, even as she was the kindest, most spiritual

person I’ve ever known.  She was the one who taught me as a

child to love, and to understand, and to do unto others as

I would want done.

I didn’t become a Christian until many years later, when I

moved to the South Side of Chicago after college.

Our only point is how come he never talks this way during his campaign. Why did he get mad, every time people will raise his Muslim background?  So what was he before becoming a Christian? Why can't he just talk about this?
Posted by mom & pop bloggers at 6:18 PM

Newsweek’s Michael Hirsh sounds panicky as he warns the President has “has all but lost control of the agenda in Washington at a time when he simply can’t afford to do so.” :

The decisive issue here is leadership. The lack of it is what is plaguing the Obama administration. Every war needs a successful general, and this administration doesn’t have one yet.

No kidding!! Obama has never been a leader in any issue in his life. He just wrote two books and you can read his books and you will know there is nothing there!!! Don't blame us, we made it clear in this blog that he just likes to give speeches , that's all he knows!
Posted by mom & pop bloggers at 9:13 AM

Remember this pledge from Obama when he was campaigning? (check right away before they erase it~)

Obama has now signed two bills into law — the Lily Ledbetter Act and SCHIP — and in neither case did he wait five days before signing.

Obama runs the risk that every rebuff is regarded as a personal setback. His first full week in power has been clouded by the farcical presence of Rod Blagojevich, the impeached former governor of Illinois, and revelations that Tom Daschle, his choice for health secretary, had failed to pay more than $128,000 in taxes.

The president’s foreign policy offensive also got off to an uncertain start. Critics claim there are too many czars and special envoys at the White House and State Department, who will end up fighting rather than problem solving.

Where is the outrage? Nearly 1 million people are without power in ice storm.. I guess the outrage was only for Katrina. HOPE and CHANGE is merely a campaign slogan.
Posted by mom & pop bloggers at 3:32 PM