Actually the head line should have said, "Analyzing Obama's Lies to the country"

We have known from the start that Obama has love affair with exaggerations!!! but we are glad to see that, finally, AP is fact checking Obama's claims:

OBAMA: "Because of the steps we took, there are about 2 million Americans working right now who would otherwise be unemployed. ... And we are on track to add another one and a half million jobs to this total by the end of the year."

THE FACTS: The success of the Obama-pushed economic stimulus that Congress approved early last year has been an ongoing point of contention. In December, the administration reported that recipients of direct assistance from the government created or saved about 650,000 jobs. The number was based on self-reporting by recipients and some of the calculations were shown to be in error.

OBAMA: He called for action by the White House and Congress "to do our work openly, and to give our people the government they deserve."

But there are more whoppers that AP did not cover, you can read more of them here.

UPDATE: wow! more pople are writing about Obama's lies in his State Of The Union address...Read here.
Posted by mom & pop bloggers at 7:20 AM

The Number of Times Obama Refers to Himself in One Speech : 132

Obama's needs his teleprompter to chat !!

Here's Obama dropping in for a chat with his middle-class task force. And people made fun of Reagan because of his notecards! 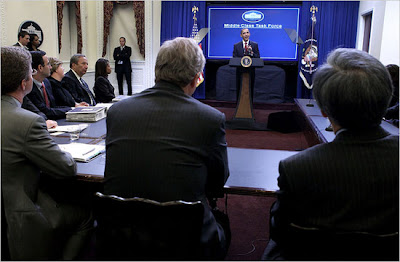 Update: Jon Stewart: You didn’t really use a teleprompter inside a classroom, did you, champ?

Obama Hires Campaign Manager To Help Him With Economy!

We are not kidding!

In the wake of bad economical data and loosing Massachusetts, Obama decides to hire his campaign manager! Not a new economic team. Not a new chief of staff. Not even a new national security staff to replace the gang that dropped the ball on the Christmas Day bomber. No, with the Obami, it is never about substance or getting the policy right. It’s not about governance. It is about the perpetual campaign. So the campaign manager gets the emergency call.

Here is the news link:

Daivd Plouffe, the man who managed President Barack Obama’s campaign, will be taking on an expanded role as an outside adviser to the White House, according to sources familiar with the plan, a move that comes just days after a stunning defeat for Democrats in a Massachusetts Senate special election.

Obama's Magic Was Based On Lies! 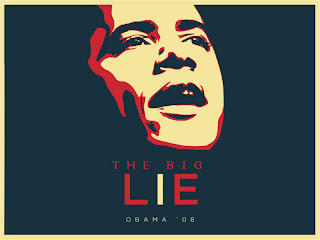 Today the thrill is gone, the doubts growing -- even among erstwhile believers.

But we warned you about him before his primary win! We told you so!
Posted by mom & pop bloggers at 7:47 AM 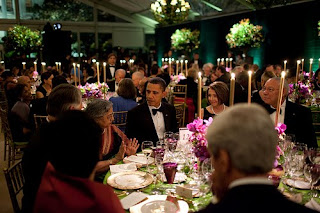 Obama White House has held one party every three days his first year in office.After Obama Tells America “Everyone Must Sacrifice” the White House Throws 1 Party Every 3 Days in First Year. Click here.

What an accomplishment! Record number of parties at the White House.

We have been saying this for months now...but we are glad to see major media reporting on Obama's promises:

During his two-year campaign, Obama thrilled massive crowds with soaring speeches, often railing against an Iraq war that now is seldom mentioned. His presidential comments now are often sober updates on issues like terrorism and the economy, a top priority now that emerged as a major issue only in the campaign's final weeks.

Obama's campaign ambition has been diluted with a pragmatism that has been the hallmark of Year One - without much of the progress he had hoped.

A look at some of the promises:

What a waste of a year!!! People were fooled in voting for him and they will pay the price for votingthe most inexperienced president we've ever had! What a shame!
Posted by mom & pop bloggers at 2:42 PM

Obama should call Senator to Resign! Let's be consistent .

In light of President Obama's decision to forgive Harry Reid's remarks about Obama's skin color and lack of a "Negro dialect," check out what Obama said about Trent Lott in 2002:

"It seems to be that we can forgive a 100-year-old senator for some of the indiscretion of his youth, but, what is more difficult to forgive is the current president of the U.S. Senate (Lott) suggesting we had been better off if we had followed a segregationist path in this country after all of the battles and fights for civil rights and all the work that we still have to do," said Obama.

Do we have a "Liar-in-Chief" at the White House?? I know this will not be the first "Lier-in-Chief", but Obama promised us "Change"!!!!

Perhaps Congressman Joe Wilson should receive the Congressional Medal of Honor for shouting out “You Lie” to Obama during his speech to Congress last year. hmm.
Posted by mom & pop bloggers at 10:34 AM 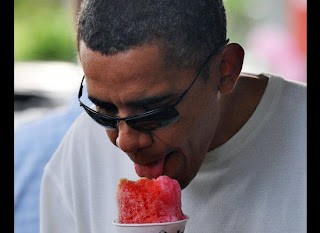 Obama waited three days before speaking about the Christmas Day attack!!!
What took him so long? Washington Post report:

Aides said Obama at no point considered cutting short his trip, and they said he still had fun despite the unexpected crises. He played golf and basketball, went snorkeling and to the gym, and ate at his favorite Honolulu restaurant. His wife and children went to the beach, and his family spent time with a group of Chicago friends who traveled to Hawaii with them and with Oahu residents who have known Obama since childhood.
UPDATE:

As this Politico story notes, the Christmas Day bombing plot has shaken the Obama administration and his supporters, leaving the latter flummoxed. They can’t seem to understand the president’s clueless reaction, which verged on peevish resentment over the interruption to his vacation:

Over the course of five days, Obama’s reaction ranged from low-keyed to reassuring to, finally, a vow to find out what went wrong. The episode was a baffling, unforced error in presidential symbolism, hardly a small part of the presidency, and the moment at which yet another of the old political maxims that Obama had sought to transcend – the Democrats’ vulnerability on national security – reasserted itself.

What is remarkable is that there seems to be some mystery as to why Obama behaved as he did:

Explanations of Obama’s low-key reaction in the face of a terror attack include the characteristic caution of a president who resists jumping to conclusions and being pushed to action. They also include the White House’s belief – disproven repeatedly in 2009 – that it can evade the clichéd rules of politics, which include a suspicion of Democratic leadership on national security. Only Sunday night, when criticism of the system “worked” comment was not going away, did White House aides realize their approach was not working and that they needed to shift course.