You're Tax Dollars hard at work!

President Obama's trip to Copenhagen, Denmark for the International Olympics Committee meeting just happens to take him out of the country the day the unemployment numbers for September are announced.

Since Michelle Obama is traveling separately, she has separate costs...

This blog copied from Campaign Spot.

Obama is all show and no substance!

Well, we have been saying this before he was even a candidate. However, we welcome when anyone in the media acknowledges that!
Read : The Do-Nothing G-20
Read: Obama's America is difference that how Americans see America
Posted by mom & pop bloggers at 8:14 AM

Chinese are now lecturing us! YES THEY CAN!

Mark McKinnon: “It’s pretty embarrassing when a Chinese president lectures an American president about free trade on his home turf. In a direct shot at his U.S. counterpart, President Hu Jintao Friday at the G-20 Summit in Pittsburgh called on his fellow leaders to ‘resolutely oppose and reject protectionism in all forms.’ Because President Obama hasn’t.”
Posted by mom & pop bloggers at 8:11 AM

On Wednesday, President Obama told the United Nations General Assembly that “if the governments of Iran and North Korea choose to ignore international standards . . . then they must be held accountable. The world must stand together to demonstrate that international law is not an empty promise, and that treaties will be enforced.”

A day later, Obama chaired a session of the U.N. Security Council. He turned it into a summit of heads of state and chose the agenda. He insisted — in the words of the advance American “concept paper” — that “The Security Council Summit will focus on nuclear non-proliferation and nuclear disarmament broadly and not focus on any specific countries


The Song says it all! What Obama promised and what he is delivering now.
Posted by mom & pop bloggers at 8:05 AM

All Statements From Obama Come With an Expiration Date

Remember Obama's speech in Prague? Here is what he said to Eastern Europeans:

So let me be clear: Iran's nuclear and ballistic missile activity poses a real threat, not just to the United States, but to Iran's neighbors and our allies. The Czech Republic and Poland have been courageous in agreeing to host a defense against these missiles. As long as the threat from Iran persists, we will go forward with a missile defense system that is cost-effective and proven.

All statements from Barack Obama come with an expiration date. We are sure you have read this headline already:

We think someone has to yell, "YOU LIED"
UPDATE: Randy Scheunemann on Obama’s retreat on missile defense: “Unilateral preemptive concession in the hope that your negotiating partners will follow suit? Anyone who believes that will work with Russia hasn’t looked at 70 years of Soviet history and 200 years of Russian history.”
UPDATE II: WSJ reports, “President Obama promised he would win America friends where, under George W. Bush, it had antagonists. The reality is that the U.S. is working hard to create antagonists where it previously had friends. That’s one conclusion to draw from President Obama’s decision yesterday to scrap a missile-defense agreement the Bush Administration negotiated with Poland and the Czech Republic.
Posted by mom & pop bloggers at 6:42 AM

“Despite President Barack Obama’s insistence that his $900 billion health care plan won’t increase already-huge federal budget deficits, experts say that it would – unless he raised more taxes than he’s suggesting he would.”

So how many experts need to say this until we conclude that Obama is a liar !
Posted by mom & pop bloggers at 8:57 AM 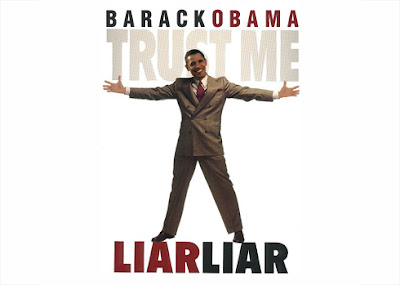 Obama's last night speech was full of lies, exaggerations and half-truths and yet he talked for 45 minutes trying hard to fool the public. Here is a great article by Matt Welch on ReasonOnline factchecking the speech:

The lies last night began in Obama's opening paragraph. "When I spoke here last winter," he began, "credit was frozen. And our financial system was on the verge of collapse." In fact, Obama spoke on Feb. 24, at least six weeks after credit markets began to thaw, and one week after heproclaimed that the passage of his $787 billion stimulus marked "the beginning of the end, the beginning of what we need to do to create jobs for Americans." Obama's speech that day wasn't about staving off a collapse, it was about cleaning up the mess and tackling long-ignored issues. Such as health care.

It's never encouraging when a politician who desperately needs to convince skeptical Americans of his fiscal sobriety starts off by slurring his words. As you might then infer, Obama was just warming up. "Insurance companies," the president announced, "will be required to cover, with no extra charge, routine checkups and preventive care, like mammograms and colonoscopies," in part because such prevention "saves money." Looks like someone forgot to tell the Congressional Budget Office, or other non-White House sources that have analyzed the cost-benefit of prevention.

Obama's promise of transparency is a big JOKE!

TheWashington Times reports that Barack Obama’s appointee for Undersecretary of Homeland Security - Science and Technology has forgotten to mention that she worked for a firm that lobbied Congress on the exact same area that she will now run. Will we get yet another waiver of the White House’s no-lobbyists executive order?
Posted by mom & pop bloggers at 10:11 AM

Obama promises of Jobs...Where are they?

Back on June 8th Barack Obama promised to speed up the Stimulus projects over the summer and to "create or save" 600,000 jobs.

As always, Obama over promises and under delivers.

Obama has one less Czar now!

Obama's green jobs czar, Van Jones, resigned under fire due to his "radical" past. Why are people surprise? A radical president will have to hire "radical" people. People should be outraged at the number of Czar that Obama has hired, not just about Van Jones. Even the left wing publication questioned about these Czares, they said, "Obama created more czars than Romanovs"!!. We covered this issue many times:
Obama's Czar are growing
Obama's 20 Czars.
Obama's Czars, how many is too many?
Obama now has 30 Czars!!...10 more than the last time we mentioned. These Czars dont have to go through any review proces they get hired bypassing Senate’s advise-and-consent procedure. So, no one really know who these people are they become President's advisors!
Posted by mom & pop bloggers at 7:56 AM 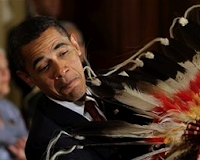 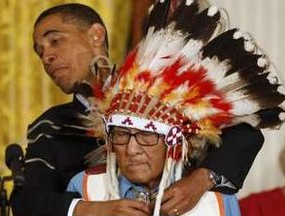 The waivers will allow the officials to participate with persons with whom and entities with which "the appointees formerly had a professional relationship," Eisen wrote, "because there was a compelling public interest in allowing it."

It will be interesting to see when Obama runs for re-election, if he will have the "audacity" to claim that he had "the strongest ethics standard in U.S. government history"???
Posted by mom & pop bloggers at 7:44 AM