Why Obama's Lies Are Important?

wow! actually someone dared to called his "gaffes" a LIE.  Read this article

His lies are just as important as Hillary's and here is why. UNLIKE Hillary, he continues to try and pursuade Americans that he is above the Politics of the past,  but continues to bash her at every opportunity. You tell me if any of these lies is any less than Hillary's.
"Just Embellished Words: Senator Obama’s Record of Exaggerations & Misstatements

Once again, the Obama campaign is getting caught saying one thing while doing another. They are personally attacking Hillary even though Sen. Obama has been found mispeaking and embellishing facts about himself more than ten times in recent months. Senator Obama’s campaign is based on words –not a record of deeds – and if those words aren’t backed up by facts, there’s not much else left.

"Senator Obama has called himself a constitutional professor, claimed credit for passing legislation that never left committee, and apparently inflated his role as a community organizer among other issues. When it comes to his record, just words won't do. Senator Obama will have to use facts as well," Clinton spokesman Phil Singer said. 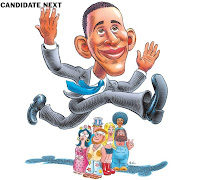 How many more Gaffes until we call him Stupid??

Last week, Alex Beam of The Boston Globe offered a gloomy assessment of Obama '08. He wrote:

[F]rankly, the people who've ponied up $4,600 for Obama in this election cycle might as well have piled the money on the kitchen table and set fire to it. Or donated it to the Audubon Society, which has a lot better chance of being in business a year from now than Obama's presidential campaign.

Beam does not get into many specifics, but he speaks to a growing sense that Obama does not have the right stuff. Most of this sense seems to stem from Obama's recent attacks of foot-in-mouth -- most recently, his 10,000-dead-in-Kansas gaffe.

John Hinderaker over at Powerline sums up the sense thusly:

This is just one of a series of gaffes by Obama that raise serious questions about his ability to compete at a high political level. The lack of common sense suggested by his gullibility in regard to the Greensburg tornado can perhaps be chalked up to lack of experience; but that's the point.