Mr. Obama told a Portland, Ore., crowd this month that Iran doesn't "pose a serious threat to us," saying that "tiny countries" with small defense budgets aren't much to worry about. But Iran has almost one-fourth the population of the U.S. and is well on its way to developing nuclear weapons. The next day Mr. Obama had to reverse himself and declare he had "made it clear for years that the threat from Iran is grave."

Last week in Orlando, Fla., he said he would meet with Venezuelan dictator Hugo Chávez to discuss, among other issues, Chávez's support of the Marxist FARC guerrillas in Colombia. The next day, in Miami, he insisted any country supporting the FARC should suffer "regional isolation." Obama advisers were left explaining how this circle could be squared.

In a debate last July, Mr. Obama pledged to meet, without precondition, the leaders of Iran, North Korea, Syria and Cuba. He called President Bush's refusal to meet with them "ridiculous" and a "disgrace."

Heavily criticized, Mr. Obama dug in rather than backtrack. He's claimed, in defense of his position, that John F. Kennedy's 1961 summit with Soviet leader Nikita Khrushchev in Vienna was a crucial meeting that led to the end of the Cold War.

Not quite. Kennedy himself admitted he was unprepared for Khrushchev's bullying. "He beat the hell out of me," Kennedy confided to advisers. The Soviet leader reported to his Politburo that the American president was weak. Two months later, the Berlin Wall was erected and stood for 28 years.

Reporters may now give Mr. Obama's many gaffes more notice. But don't count on them correcting an implicit bias in writing about such faux pas.

Rick Moran has a great peace in Pajamas Media

"Is it my imagination, or is it true that the closer Barack Obama gets to sewing up the Democratic nomination for president, the more outrageous his gaffes and misstatements of fact become?"

Don't tell me that the "57 states" gaffe was an innocent mistake, watch the video and you will see that he actually did a brief pause and thought about it.
Posted by mom & pop bloggers at 11:10 AM 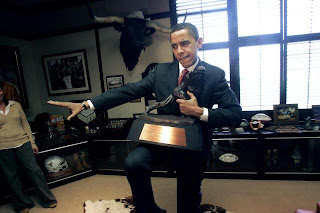 American reporter bloggs:
How are we supposed to take this man seriously for the position of commander in chief?  Little Green Footballs snags Obama in a stunning error, and it is not just the name of the town he is in or the number of states.

Since the Bush Administration launched a misguided war in Iraq, its policy in the Americas has been negligent toward our friends, ineffective with our adversaries, disinterested in the challenges that matter in peoples' lives, and incapable of advancing our interests in the region.
No wonder, then, that demagogues like Hugo Chavez have stepped into this vacuum.

This is pathetic. Hugo Chavez came to power during the Clinton Administration, and was first elected President of Venezuela in 1998, two years before the Bush Administration took office.

IS OBAMA ON DRUGS? 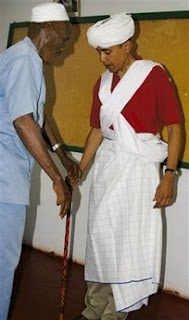 How come he can not be eloquent without the TelePrompTers??
Obama's Gaffes Start To Pile Up.  Sounds like a headline from this week's newspapers, right?  Nope, it's from the Chicago Sun-Times over a year ago, March 28, 2007.  One of the most glaring gaffes mentioned is his claim that "because of what happened in Selma, Alabama, because some folks are willing to march across a bridge, [his parents] got together and Barack Obama Jr. was born."
Continue to read here
Posted by mom & pop bloggers at 9:33 AM 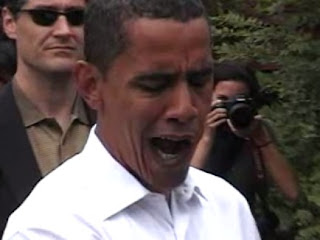 The guy’s a perpetual gaffe machine. Let us count the ways, large and small, that his tongue has betrayed him throughout the campaign:

* Last May, he claimed that Kansas tornadoes killed a whopping 10,000 people: “In case you missed it, this week, there was a tragedy in Kansas. Ten thousand people died — an entire town destroyed.” The actual death toll: 12.

*Last week, in front of a roaring Sioux Falls, South Dakota audience, Obama exulted: “Thank you Sioux City…I said it wrong. I’ve been in Iowa for too long. I’m sorry.”

*Explaining last week why he was trailing Hillary Clinton in Kentucky, Obama again botched basic geography: “Sen. Clinton, I think, is much better known, coming from a nearby state of Arkansas. So it’s not surprising that she would have an advantage in some of those states in the middle.” On what map is Arkansas closer to Kentucky than Illinois?

*Obama has as much trouble with numbers as he has with maps. Last March, on the anniversary of the Bloody Sunday march in Selma, Alabama, he claimed his parents united as a direct result of the civil rights movement:

“There was something stirring across the country because of what happened in Selma, Alabama, because some folks are willing to march across a bridge. So they got together and Barack Obama Jr. was born.”

Obama conceded that he has a steep challenge to get his message and background to voters in states such as Kentucky — where he trails Sen. Hillary Clinton by 27 points, according to a poll published earlier this week — and West Virginia, where voters chose Clinton over Obama by 40 points on Tuesday.

"What it says is that I'm not very well known in that part of the country," Obama said. "Sen. Clinton, I think, is much better known, coming from a nearby state of Arkansas. So it's not surprising that she would have an advantage in some of those states in the middle."

Trouble is, as a look at a US map (with territories) shows, Arkansas may be "nearby," but Obama's home state of Illinois is "adjacent":

Its the sales pitch, stupid!

It’s the sales pitch, stupid! Obama knows what to say and when to say it, even though he has taken both sides of all issues at one point or another and only someone willing to do the research and connect the dots will ever know exactly what he stands for…